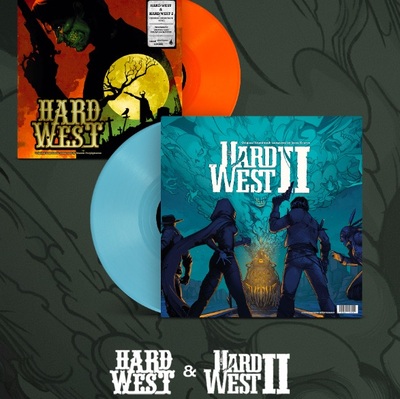 The first disc of the vinyl release includes the complete 14-track soundtrack album for 2015’s Hard West, composed by Cyberpunk 2077 co-composer Marcin Przybyłowicz. The turn-based tactical game is available for Windows, Mac and Linux through Steam, along with Nintendo Switch.

The second disc features a nine-track selection of music from Hard West 2 by Moss: Book II composer Jason Graves. Players can assume control of a supernatural posse and catch the mysterious Ghost Train when Hard West 2, developed by Ice Code Games, launches later today for Windows through Steam and GOG.

Sleeve artwork for the Hard West analog record is by Grzegorz Przybyś, while Hard West 2 sleeve art is by Division48 Studio. Preorders are also open at distributors Light in the Attic in Seattle and Black Screen Records in Europe. Digital soundtracks for both titles are streaming on Spotify.

Listeners will be taken on a truly epic chronological journey through the series’ historical timeline — starting in antiquity with Assassin’s Creed Odyssey and ending in the modern era with Assassin’s Creed Syndicate. Each vinyl side includes music from one of the mainline games (Ezio sequels Brotherhood and Revelations share a side, as do Unity and Rogue.)