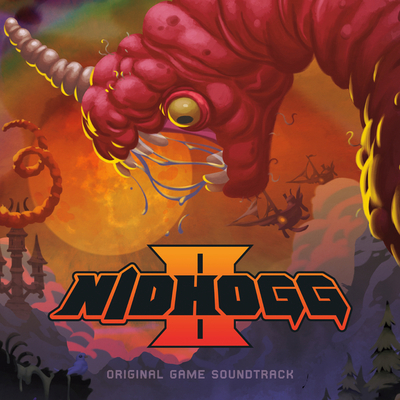 Messhof's independently developed Nidhogg 2, led by American game designer Mark Essen, builds upon the foundations of the original game from 2014. Published in 2017 for PlayStation 4, and Windows and Mac through Steam, Nidhogg 2 saw Xbox One and Nintendo Switch ports launch the following year.

The one-on-one fighting game centers on a simple gameplay mechanic. Player characters battle their way past an opponent for several screens in hopes of getting eaten by a giant worm, and thus winning the duel. A colorful and energetic 2D title, Nidhogg II sports an array of classic melee and ranged weaponry for maximum carnage.

The sequel diverges from the 8-bit ‘Atari’ aesthetic of the original, this time emphasizing fleshiness in the character designs and cartoonish gore. Canadian games artist Toby Dixon's approach embraces a visual style reminiscent of the 16-bit Mega Drive console.

Publisher Alpha Pup Records' audio cassette release of the soundtrack can be purchased through Juno Records in the United Kingdom. Daedelus, who returns to the series after scoring the original Nidhogg, is joined by featured electronica and hip-hop artists Mux Mool, Geotic, Doseone and Osborne.

Alpha Pup's vinyl publication is currently out of stock. The digital soundtrack can be purchased through Bandcamp and Steam, and streamed online through Spotify and Amazon Music Unlimited. Excerpts from the album release are on Soundcloud.

Sequel to the indie hit of 2014, Nidhogg 2 builds upon the award-winning gameplay of its predecessor with new weapons to wield and levels to master, head-to-toe character customization, and the captivatingly grotesque art of Toby Dixon. And, with music from artists including Mux Mool, Geotic, Doseone, Osborne, and Daedelus, Nidhogg 2 has a soundtrack so good that even the menu screens are awesome.

Until You Fall synthwave soundtrack published through Steam