Feature Q&A: Mutherpluckin' B on The Mushroom Variety Show 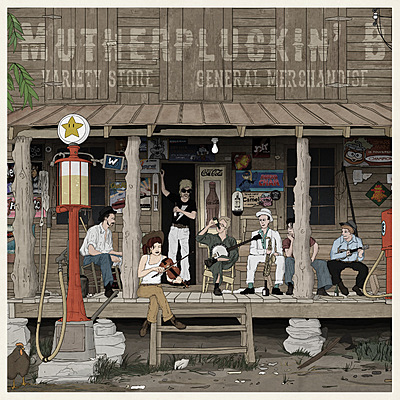 In this interview, the musician looks back at the history behind his album The Mushroom Variety Show, named for its inclusion of submissions from the Dwelling of Duels competition and an OverClocked Remix compilation, among other assorted sources.

The album strikes a balance between familiar, classic gaming themes and contemporary indie titles from Sweden (ilomilo) and Japan (Rokko Chan). The assortment is framed by the two-part "Flyin' High," first introducing the Variety Show and later serving as its conclusion.

Each of your four albums contains a strong personal signature, and at the same time there are different genres you have gravitated toward for extended periods. How do you observe this process of yours having evolved over time?

Henrik Lidbjörk: On the album prior to 8 Bit Democracy, doing game covers was still new to me. I was having a lot of fun because not a lot of people had listened to my music before and they were surprised by it. I found a lot of satisfaction in how well the Blaxploitation soundtrack kind of vibe that I was experimenting with was holding together.

With 8 Bit Democracy I started branching out more stylistically, developing as a musician and a producer. In many ways it was much better than Nintendosploitation, because I was more experienced.

Something about your music that I find practically absent in most game covers online is the sense of historicity. You include a recording of a Malcolm X speech, a soundbite from Shaft, a melody from an NES game, and together these reminders of '60s, '70s and '80’s media gives a context to contemporary tastes in music.

I think the more time flies, the closer these things seem. In the late '80s, the NES and Sega Master System were current and Malcolm X or Shaft was history. I guess the kids of today sometimes might not really know the difference between 1972 and 1982.

Is there music you have been listening to since the release of 8 Bit Democracy that has struck a chord with you and inspired a new direction for The Mushroom Variety Show?

I’ve been kind of divided between listening to two different styles of music. The country style I’ve been doing lately is a bit more acoustic, for instance with the banjo and acoustic guitar tracks on the album.

At the same, there is a Gimmick! cover not on the album that is more slick, like disco rock. I’ve been listening to Daft Punk quite a lot recently. That style of electronic, synthesizer music and the old American, acoustic genre are quite far from each other.

Both the Gimmick! cover and "Blasting Through the Years" are lined up for a future album release?

Yes, that's the plan. I suppose that with another five songs or so I would have enough material for a new album.

When you mention country being a theme of the Mushroom Variety Show, is that something you were illustrating with the album cover, showing people milling out front the general store?

Yeah, basically I drew that based on a photograph I found on Wikipedia. I’ve been playing 1960’s rock and roll, and blues for years, and have listened to the Rolling Stones for many hours. They’ve all been influenced by country. Really that influence has always been there.

Doing this acoustic style, I had this idea in mind of showing myself and the guest musicians on the front porch on the front cover. The best image I could find was this photograph from North Carolina.

How would you say the instrumentation of The Mushroom Variety Show reflects this theme of American country that is depicted in your cover art?

There are a few more acoustic guitars, a ukelele and a banjo played by friends of mine on "Six Days in the Mountains," the Himalaya song from DuckTales. My girlfriend plays a real fiddle on a few. Another friend of mine plays saxophone on the Super Mario 3 song "The Mushroom Variety Show," a Los Vegas cabaret kind of sound. But mostly I play the usual guitar, bass and keyboards.

The Teenage Mutant Ninja Turtles cover, "Flyin' High," appeared in a modified form as part of an OverClocked ReMix compilation. I think it plays an important role in lending structure to the LP, introducing and providing a coda for the album.

I wanted to get these songs from different competitions out there, because it felt like a waste to have them just lying around on the hard drive. Then I started by cleaning some things up and replacing instruments, adding the guest musicians and some new covers, like "Spark Man" and Super Mario Bros. 3.

To what do you attribute the popularity of Swedish indie games like ilomilo, a theme from which is included on the album? Going further back, you also find there is international popularity among music groups originating there.

There is a lot of good music coming out of Sweden. I think it boils down to our being kind of rich and having a welfare system. We don't have to work our asses off all the time. We get fairly long holidays, giving people the freedom to actually experiment with music.

Music has been my main connection to America, through funk, soul and blues. There is this history in Sweden of being influenced by music from the Western world. The internet is big here, people speak English well and we're quite connected. It's a good place for people who want to program games.

Sweden is often viewed as being politically progressive. There was a feature in the New York Times that attracted a lot of attention, about Swedish schools experimenting with using the same pronoun "hen" for boys and girls.

It depends on who you ask. Forty years ago you had the United States on the right side and the Soviet Union on the left, while Sweden was somewhere in the middle, trying to be an open democracy with socialist leanings and welfare politics.

But these days Sweden is a lot like the rest of the world, integrated with the European Union. The world is different today, with the internet. All countries more heavily influence each other.

You've spoken about the personal influence of American music on your four albums. Why do you think the music of the Mega Man series from Japan has proven to be such a prevailing influence?

Typically on an album I want to have at least a few classic songs that casual listeners might recognize. But mostly it's just because I love those songs so much.

When I started, there was so much from Mega Man 2 that I really wanted to play. Also, I know there are so many other people who love that music. Now that I've done almost everything in the game, I'm thinking about putting all those covers out in a single compilation for a complete Mega Man 2 record.