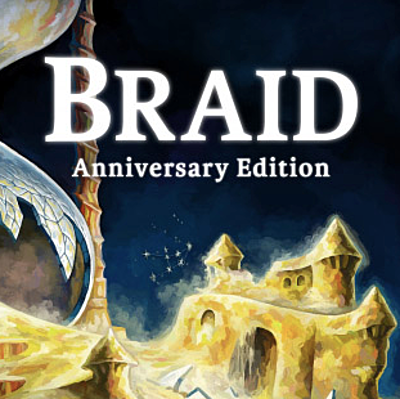 The soundtrack for Braid is by California artists Jami Sieber, Shira Kammen and Cheryl Ann Fulton. The digital album "Music from Braid" includes "Maenam," "Undercurrent," "The Darkening Ground," "Tell It By Heart" and "Long Past Gone" by Sieber. These themes are joined by "Downstream" and "Lullaby Set" by Kammen, and "Romanesca" by Fulton to round out the hourlong album.

Commemorating the ten-year anniversary of the original publication date, Braid Anniversary Edition is due for release on PlayStation 5, Xbox Series X, PlayStation 4, Xbox One, Switch, PC, Mac, and Linux in early 2021. The enhanced port will feature new animations on the hand-repainted graphics by artist David Hellman, along with remixed and remastered audio by Martin Stig Andersen and Hans Christian Kock.

Braid is a puzzle-platformer, drawn in a painterly style, where you can manipulate the flow of time in strange and unusual ways. From a house in the city, journey to a series of worlds and solve puzzles to rescue an abducted princess.

Who remember this one?