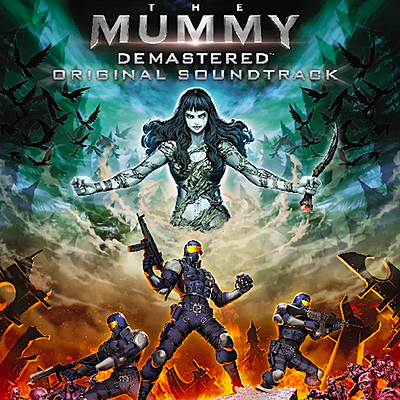 The Mummy Demastered for PlayStation 4 and Nintendo Switch features a soundtrack album by Monomer, now available for streaming on Amazon Music Unlimited, Spotify, and YouTube Music.

Developed by WayForward in collaboration with Universal Brand Development, The Mummy Demastered is a 2D non-linear action-adventure game based on the 2017 film. As with the film, the game depicts the operations of Prodigium, an elite organization whose secret agents are tasked with identifying and thwarting supernatural threats.

A powerful ancient evil has arisen, and the war to save humanity has begun! The Mummy Demastered throws you into a 16-bit-inspired battle against the undead in a 2D, nonlinear, action-packed adventure. As an elite agent in the monster-hunting Prodigium organization, you must use a variety of weapons, upgrades, and magical artifacts to defend mankind against the supernatural hordes of Princess Ahmanet.

Your Prodigium teammates are already on the scene, but HQ lost contact with them hours ago; only by exploring tombs, forests, abandoned tunnels, and the cursed streets of London will you discover the fate of your allies. But beware - Ahmanet commands legions of zombies, insects, plague-ridden vermin, and worse... and if you're not careful, you'll be the next soul in Ahmanet's thrall.