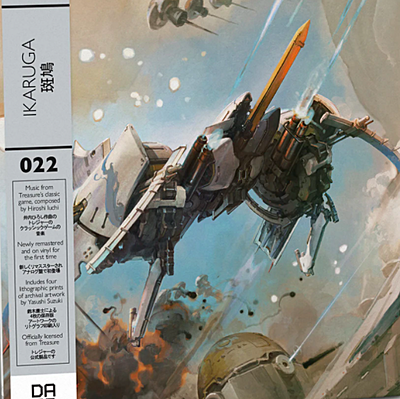 Developed by Treasure in late 2001 for the arcades, the vertical shoot-em-up places the player in control of the Ikaruga fighter plane. The aircraft is capable of flipping polarities between black and white, allowing the Ikaruga to absorb light or dark projectiles based on its current polarity. The game features a melange of shooting and puzzle elements as a result of this gameplay dynamic.

Ikaruga received ports for the Sega Dreamcast and Nintendo GameCube home consoles. The digital edition is available for Xbox 360 (and Xbox One through backward compatibility), Nintendo Switch, PlayStation 4 and Windows.

Data Discs' vinyl publication marks the first time the soundtrack album by Hiroshi Iuchi has seen a release in any format. Excerpts from the remastered vinyl soundtrack are streaming on the publisher's SoundCloud channel.

Steeped in dramatic tension and propelled by frenetic synths, this sublime score, composed by Hiroshi Iuchi (who also directed the game) perfectly encapsulates the meticulous design and demanding nature of this most revered of shooters. IKARUGA is presented as a 180g vinyl LP, carefully remastered and packed into a heavyweight matt laminated sleeve. It is accompanied by four lithographic prints of beautiful illustrations by Yasushi Suzuki and an obi strip.

Our IKARUGA release goes on sale today! We are honoured to have partnered with @TreasureCoLtd to offer the first ever release of this score on any format. Available to order from 19:00 (UK time) at https://t.co/Z7oODGAIml pic.twitter.com/kMHv00aX1U