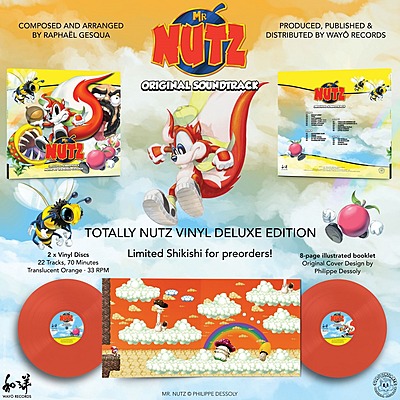 Commemorating the thirtieth anniversary of the Super Nintendo game, French record label Wayô Records has announced the publication of the Mr. Nutz soundtrack on vinyl and compact disc.

The 1993 side-scrolling platformer was a collaborative effort between graphics artist Philippe Dessoly and programmer Pierre Adane, published by Ocean Software. Music for the soundtrack is by composer Raphaël Gesqua, with illustrations for the packaging contributed by Dessoly.

The 22-track soundtrack is streaming on Spotify, while a six-minute trailer can be viewed on YouTube, courtesy of the publisher. The vinyl soundtrack is available for preorder through Black Screen Records of Cologne and Light in the Attic of Seattle, scheduled for shipping in August.

To celebrate the upcoming 30th anniversary of the little squirrel, we have the pleasure to pay a tribute to this jewel made in France with the release of the original soundtrack, newly illustrated by its original creator, Philippe Dessoly! Mr. Nutz original soundtrack is composed by Raphaël Gesqua and remastered for the vinyl format in this 'Totally Nutz' collector Edition