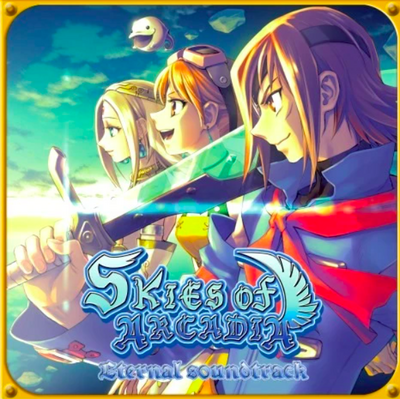 French publisher Wayô Records has reprinted the Skies of Arcadia vinyl soundtrack. The box set includes 30 tracks from the game on two vinyl LPs, an original piano suite on an additional vinyl LP, a 24-page English-language booklet, and a limited edition collectible Shikishi.

Titled "Eternal Arcadia" in Japan, Skies of Arcadia arrived on the Sega Dreamcast in 2000. Taking place in a world of airships and floating continents, Arcadia tells the story of Vyse and Aika, two air pirates fighting to keep an evil empire from reviving ancient weapons that once nearly destroyed civilization. An expanded “director’s cut," titled Skies of Arcadia Legends, was released for the Nintendo GameCube console in 2002.

The 180-gram, audiophile-quality blue vinyl LPs contain music tracks from the role-playing game, composed and arranged by Yutaka Minobe and Tatsuyuki Maeda, many of which are performed by the Skies of Arcadia Symphony Orchestra. The album's two new piano arrangements are by Ramon van Engelenhoven. A compact disc edition can also be purchased through Wayô Records.

The Skies of Arcadia vinyl soundtrack ships through the publisher, as well as distributors Fangamer in Tucson and PixelCrib in Australia. The two-volume digital soundtrack is available for streaming on Spotify.

Composed by Yutaka Minobe and Tatsuyuki Maeda, the Skies of Arcadia soundtrack sets the tone for a wonderful adventure throughout beautiful and varied celestial lands, and plays a crucial part in making the game one of the Dreamcast’s finest titles. It was a technological prowess of its time, thanks to the use of interactive arrangements that changed the mood of the music depending on the land you explored. Some tracks were fully orchestrated and performed by the Skies of Arcadia Symphony Orchestra.

Back in stock!
Skies of Arcadia Eternal Soundtrack LP in a new translucent turquoise color!
Features the legendary OST + the fantastic piano suite arranged & performed by @OneWinged_Engel
A must have for all air pirates!