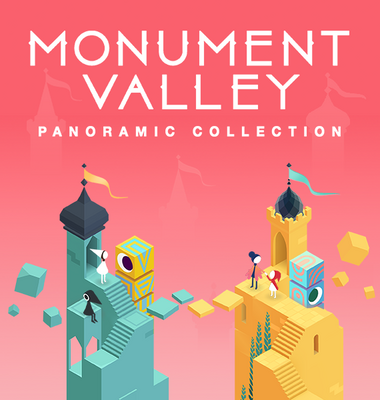 Monument Valley: Panoramic Edition by Ustwo Games is scheduled for release on July 12th through Steam. First published in 2017 for mobile devices, the enhanced port will be playable in fullscreen HD and on ultrawide displays. All previously published downloadable content from Monument Valley and Monument Valley 2 will be bundled together in the Panoramic Collection for Windows operating systems. The intuitive gameplay involves revolving landscapes to reveal new paths, allowing your player character to navigate around obstacles. Music for Monument Valley is composed by Stafford Bawler, Obfusc and Grigori. Volume 2 of the soundtrack contains background tracks from the "Forgotten Shores" and "Ida’s Dream" content expansions, bringing the total count to 31 music tracks across both volumes of the original score. The Monument Valley soundtracks are available for streaming on YouTube Music, Spotify and Amazon Music Unlimited, with "The Garden" by Bawler previewed on the developer's SoundCloud channel.

Embark on a journey of forgiveness along with Ida, the silent princess, through impossible environments and illusionary puzzles. Experience this meditative and calming puzzle game by manipulating monuments and creating evolving paths to explore new, surreal, and mysterious worlds. Step into the new expanded world of Monument Valley: Panoramic Edition - and experience more intriguing impossibilities than ever before.

Step into the new expanded world of Monument Valley: Panoramic Collection - with more intriguing impossibilities than ever before✨