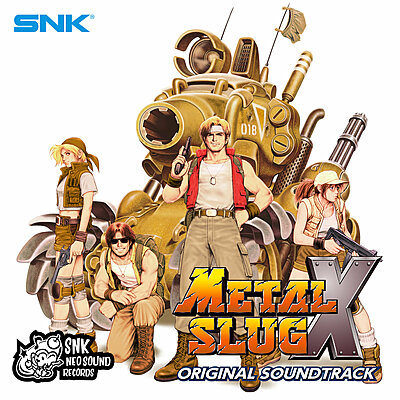 Wayô Records has pressed the soundtrack for developer SNK Corporation's Metal Slug X on vinyl, with shipping estimated for mid-October. Music for the sprite-based, run-and-gun platformer is by Takushi Hiyamuta.

Debuting in 1999 for the Neo Geo MVS, the enhanced modification of Metal Slug 2 eliminated previous instances of slowdown, and substitutes the time of day, enemy count and background music on various stages.

Metal Slug X stars the Peregrine Falcon Strike Force and centers on their battles against both the tyrannical General Morden and a hostile army of extraterrestrials. The protagonists of the original title are now aided by two additional female playable characters, Eri Kasamoto and Fiolina Germi.

The iconic soundtrack from the legendary game Metal Slug X for the first time as a stand-alone release in vinyl format, for the 25th Anniversary of the legendary SNK game series! Go Peregrine Falcon Squads...

Are you ready for the return of the Falcon Strike Force? 🔥

For the 25th anniversary of the legendary @SNKPofficial's game series #MetalSlug, Wayô Records is proud to present this new complete edition of the Metal Slug X soundtrack in vinyl format!