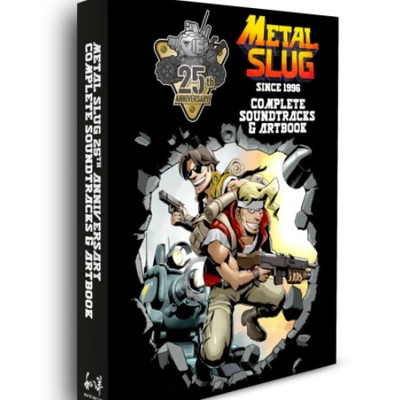 The 96-page art book showcases concept art from the run-and-gun series, including character, enemy and vehicles designs, with commentary translated into English. The box set is scheduled for shipping from the publisher in June, with cover art by SNK illustrator Tonko.

The Metal Slug Complete Soundtracks & Artbook set is also available for preorder through distributors Light in the Attic in Seattle, PixelCrib in Australia, and BEEP Shop in Japan. Wayô Records' previously released vinyl publications of the Metal Slug 3 and Metal Slug X music scores ship separately from the publisher.

To celebrate the legendary SNK game series, which has been popular for over 25 years since its introduction in 1996, Wayô Records is proud to present this new box with the complete original soundtracks from the METAL SLUG games, on 6 CD inserted into a beautiful 96-page Artbook! Includes a large selection of concept artworks, early character, enemies, and vehicles design and more! All comments from the team are translated in English...

For the 25th anniversary of the legendary SNK's game series, we are proud to present this new box with the COMPLETE ORIGINAL SOUNDTRACKS from the #METALSLUG games, on 6 CD insered into a beautiful 96-page Artbook 🔥

With a new illustration by Tonko!https://t.co/EBuzcw5DWf

Bits of Music from The Stanley Parable explorable through Bandcamp