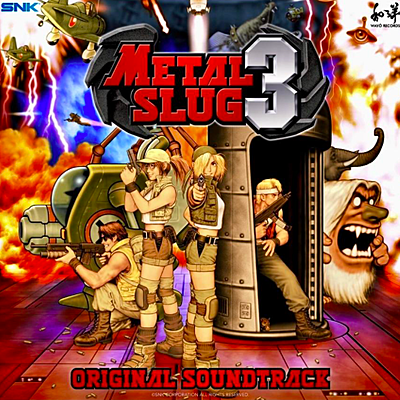 Commemorating the 25th anniversary of the franchise, French publisher Wayô Records has published the two-disc vinyl soundtrack for Metal Slug 3.

Designed by SNK, the run-and-gun title debuted in 2000 for the arcades and was later ported to the PlayStation 2 and Xbox home consoles. Metal Slug 3 centers on the Peregrine Falcon Strike Force as they track down the remaining armed troops of General Morden, and are soon pitted against hostile space aliens.

Featuring music by Masato Horiuchi, Takushi Hiyamuta and Yoshihiko Wada, the double vinyl soundtrack ships from distributor PixelCrib in Australia. The compact disc edition is available through the Wayô store. Excerpts can be previewed on YouTube, courtesy of the publisher.

The Arcade Archives edition of Metal Slug 3 is available for Windows, Nintendo Switch, Xbox One and PlayStation 4. The 28-track digital soundtrack is streaming on Spotify and Amazon Music Unlimited.

Wayô Records - (OUT OF STOCK)