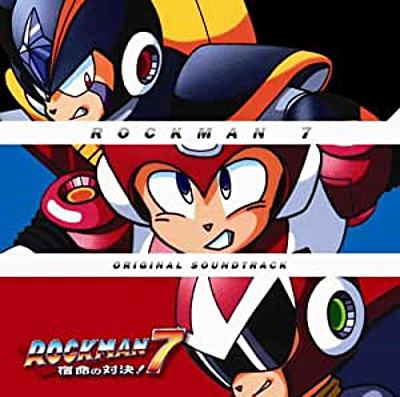 Music for the sole 16-bit installment in the mainline series is by Makoto Tomozawa (V-Tomozoh), Toshihiko Horiyama (Krsk) and Yuko Takehara (Yuk). Two themes from Ghouls 'n Ghosts by Ayako Mori appear as alternate tracks during the "Shade Man" stage.

Mega Man 7 is included in the Mega Man Legacy Collection 2 compilation for Nintendo Switch, PlayStation 4, Xbox One and Steam.

Dr. Wily knew that one day his plans would fail him. But as the world cheered at his capture, the nefarious scientist stowed four robots in his lab, set to activate after six months of no communication from their master. Now the robots have started a rampage in the city, which serves as the perfect distraction for Dr. Wily to make his getaway.But Mega Man and his trusty sidekick, Rush, are hot on his trail...and so are Bass and Treble?

The Boxed Garden album by Yasunori Mitsuda on streaming platforms