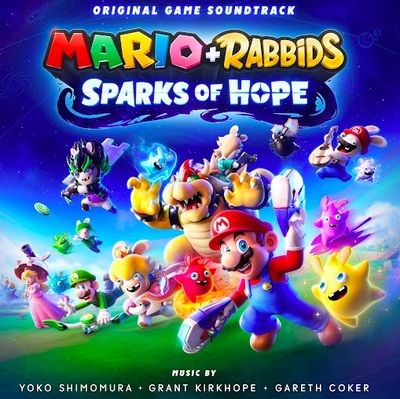 The sequel to 2017's Mario + Rabbids Kingdom Battle was developed by Ubisoft's Paris and Ubisoft Milan studios. Expanding beyond the previous titles' locales within the Mushroom Kingdom, the gameplay revolves around rescuing the Sparks throughout the galaxy by engaging in turn-based tactical combat battles against antagonist Cursa and her Spark Hunters.

Over fifty tracks in length, the Sparks of Hope digital soundtrack is streaming on Spotify and Amazon Music Unlimited. A behind-the-scenes video entitled "A Musical Journey" can be viewed on the developer's YouTube channel.

Team up with Mario, Luigi, Princess Peach, Rabbid Peach, Rabbid Luigi, and their friends on a galactic journey to defeat a malevolent entity and save your Spark companions. Explore planets throughout the galaxy as you uncover mysterious secrets and compelling quests...