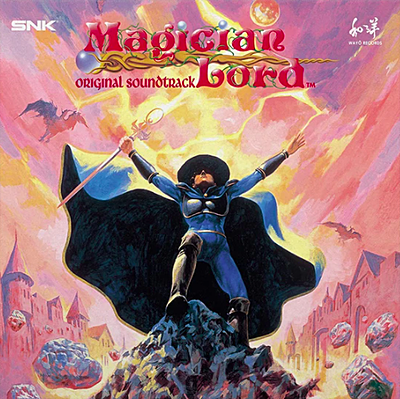 Wayô Records' Magician Lord soundtrack published in vinyl and compact disc editions are available for shipping through the publisher with a new illustration by SNK graphic designer Eisuke Ogura.

Developed by Alpha Denshi, the sidescrolling action game debuted in 1990 for the Neo Geo arcade cabinet and home console. The soundtrack album, available for streaming on Apple Music through SNK NEO Sound Records, features compositions by Hiroaki Shimizu. A crossfade preview of the music score can be viewed on YouTube, courtesy of the publisher.

In addition to this release, the soundtrack is accompanied by a brand-new virtuoso piano arrangement, especially produced by Wayô Records, and recorded in studio on a beautiful Steinway model C by Nicolas Horvath (official Steinway Artist). This new piano arrangement is part of the Wayô Piano Collection and is a unique way to rediscover the fabulous Magician Lord soundtrack.