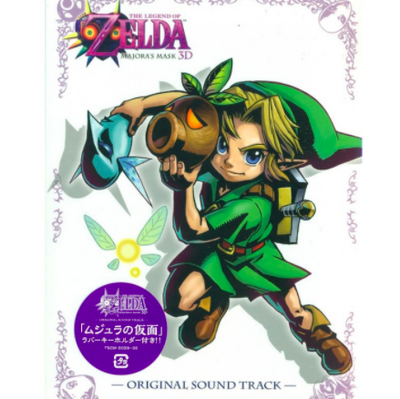 A thematically foreboding sequel to Ocarina of Time, The Legend of Zelda: Majora’s Mask debuted for the Nintendo 64 console in 2000. A remake for the Nintendo 3DS portable console followed in 2015, with music arrangements by Mahito Yokota and Naoto Kubo.

Majora’s Mask sees protagonist Link's departure from the Kingdom of Hyrule, as he embarks upon a troubling quest within the parallel dimension of the world of Termina. Link has three days to retrieve his stolen Ocarina of Time before the Moon falls from the sky, colliding with the surface of Termina.

Nintendo has announced that on February 25th, Majora's Mask will be added to the Nintendo 64 game library of the Nintendo Switch Online Expansion Pack. The two-disc soundtrack album for the 3DS remake ships domestically from Play-Asia. Original compositions are by Kubo, Koji Kondo and Toru Minegishi.

The Legend of Zelda: Majora’s Mask 3D is a remastered and enhanced version of the Nintendo classic that’s unlike any other Legend of Zelda adventure. In this shadowy tale, a masked Skull Kid drags Link™ into the world of Termina, where the moon is falling from the sky. Lucky for Termina, Link can reverse time and relive his last 72 hours in limitless ways. Each time, he’ll don any of his 20+ masks, help different citizens, battle different bosses, and ultimately change the fate of a world.

Link is dragged into the world of Termina, where the moon is falling from the sky!

Relive the world’s final 72 hours when The Legend of #Zelda: Majora's Mask comes to #NintendoSwitch for #NintendoSwitchOnline + Expansion Pack members on 2/25. #Nintendo64. pic.twitter.com/712guV6wtz