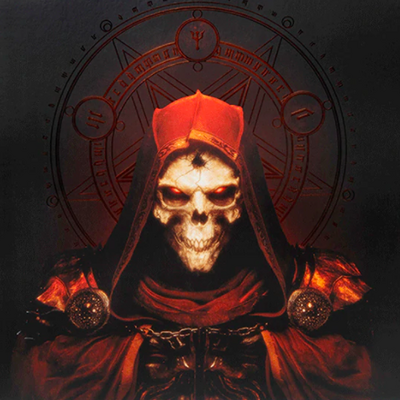 Preorders have opened at publisher iam8bit for the Diablo II: Resurrected vinyl soundtrack, available in regular and limited edition sets. The vinyl soundtrack is also available through distributors PixelCrib in Australia and Black Screen Records in Europe.

Resurrected is the recently remastered edition of the action RPG Diablo II and expansion "Lord of Destruction," co-developed by Blizzard Entertainment and Vicarious Visions. During the mission to defeat Baal, the Lord of Destruction, players can use the legacy toggle in the Options menu to switch between high-definition graphics and old school visuals.


Resurrected supports cooperative gameplay for up to eight players. Selecting from among various classes—including assassin, necromancer, barbarian, and sorceress—each character type can access thirty dedicated skills. The 17-track digital soundtrack for the original edition, composed by Matt Uelman and published in 2000, is streaming on Spotify.

Album art is by Billelis, with design by Ryan Brinkerhoff. Shipping for the vinyl soundtrack is scheduled for March of 2022. Diablo II: Resurrected is available for Windows through Battle.net, along with Nintendo Switch, PS4 and PlayStation 5, and Xbox One and Series S|X.

Diablo is prolifically iconic — a world so richly realized, that merely uttering its name evokes spine tingling goosebumps. Make no mistake, though, because world-building a place like Sanctuary isn’t just about aesthetics and character. Carefully crafted ambient audio can provide incredible texture, evolving the idea of a soundtrack to a place of total transcendence. We’re talking about a one-way ticket to the fully enveloping sounds of a demonic homestead, courtesy of maestro Matt Uelman. This is a completely remastered-for-vinyl experience, featuring beloved tracks like “Tristram,” from Diablo II: Resurrected.

Ghostrunner for PS5 free for PlayStation Plus subscribers in March