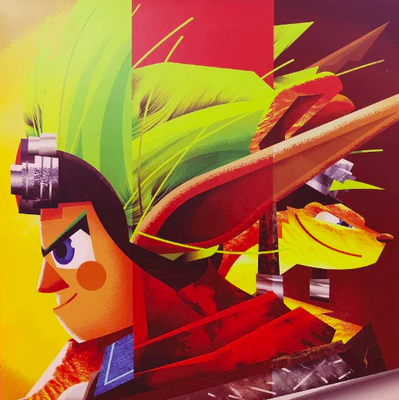 The Jak and Daxter Soundtrack Collection Vinyl has been restocked at Fangamer in Tucson. Published in collaboration with Sony and developer Naughty Dog, the double vinyl album features music curated by Los Angeles-based composer Josh Mancell.

The two-disc analog record release on "Jak Yellow" and "Daxter Orange vinyl" is decorated with original art by Collin Daniel Schlicht. The lineup of music totals 24 tracks from Jak and Daxter: The Precursor Legacy, Jak II, and Jak 3.

Mancell recently self-published the "Rejakt Vol.1" EP, a digital album consisting of Jak II soundtrack demos and outtakes. The open world third-person shooter debuted on the PlayStation 2 console in 2003, while a remastered edition was included in the Jak and Daxter Collection for PS3 and PS Vita.

Combining the three complete games of the best-selling PlayStation 2 franchise, the Jak and Daxter Collection offers all the nonstop action you love, now remastered in stereoscopic 3D and high-definition. Journey back to where it all began in Jak and Daxter: The Precursor Legacy, then explore the dark, futuristic world of Jak II as the weapons, abilities and vehicle physics get kicked up a notch. Re-experience the epic climax to the series that leaves Jak and his sidekick battling their way through an unforgiving wasteland and left for dead. In a place where survival of the fittest is the rule of the land, Jak is armed with potent weapons, armor and vehicles as they set out to escape this treacherous world.

Rejakt volume one is available now via Bandcamp. Ongoing thank yous for your interest/support )))https://t.co/b9MO9a1bY6