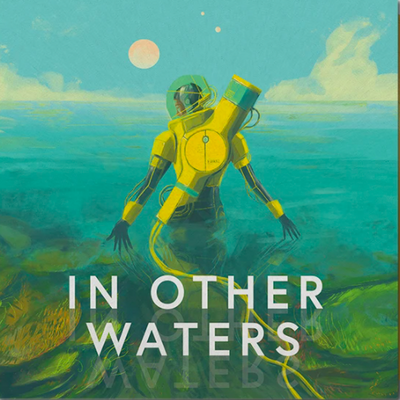 European publisher Black Screen Records of Cologne is preparing a winter physical release for the ambient soundtrack to In Other Waters, composed by Amos Roddy.

The single 180-gram sun yellow vinyl release comes with an art print designed by Gareth Damian Martin, primarily solo developer of game studio Jump Over The Age. The analog record release is estimated to ship this December. In Other Waters is available for Nintendo Switch, as well as Windows and Mac operating systems through Steam and GOG.

In Other Waters' vinyl soundtrack preorders are also available through distributors Light in the Attic in Seattle, PixelCrib in Australia, and disk union in Japan. The 15-track digital soundtrack album for the narrative exploration title is available for purchase through Bandcamp, Steam and GOG, as well as streaming on Spotify.

In Other Waters is a game about imagining an alien world you never get to see, and Amos's soundtrack is a huge part of that experience, immersing the player in both glittering shallows and inky depths. Putting together the design for this gatefold LP I wanted to capture that feeling of immersion, so it offers a detailed topographic map of the game's reef you can mentally journey across at while you listen, as well as art to suggest the strange forms life takes in this complex ocean.

Light in the Attic - In Other Waters Vinyl Soundtrack

PixelCrib - In Other Waters Vinyl Soundtrack

GOG - In Other Waters (Soundtrack)

IN OTHER WATERS Soundtrack finally comes to vinyl!