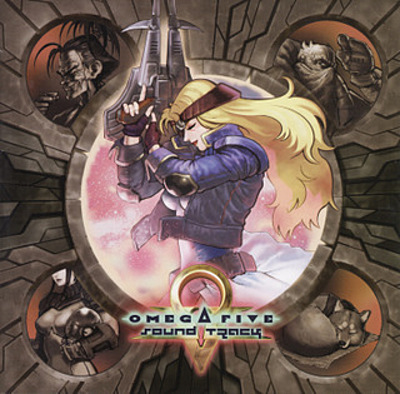 Premiering on the Xbox Live Arcade for Xbox 360, Omega Five has since joined Xbox One's library of backward compatible downloadable titles. The horizontal shooter's unlockable Retro Mode features an alternate gameplay presentation during which both graphics and sound are stylized to imitate 16-bit hardware.

The soundtrack by Natsume composer Hiroyuki Iwatsuki, whose music appears in the Natsume Atari Tengo Project remakes Wild Guns Reloaded and Ninja Saviors, contains up to three iterations of each music track. The score features contemporary electronic music, retro chiptune sounds, and arrangements by SuperSweep label composers. We spoke with the game's composer to discuss the making of the multifaceted soundtrack album.

Iwatsuki-san, thank you for joining us to discuss the soundtrack to Omega Five. Can you tell us about how you were involved in communicating with the design team during the planning stages of the game's development?

Hiroyuki Iwatsuki: At the onset, the production team did not make any specifications regarding the music. They were up for incorporating whatever kinds of music I created. As the project continued, I met with more staff members to view the content and stages of the game. Seeing screens during development informed what kind of content would be appropriate for individual stages as well as the product as a whole.

I am not certain exactly what kind of impact the background music had on other staff members. However, when the main programmer first heard the music for the Retro Mode, he found it exciting and made some further refinements to the visual processing to match the sounds.

Retro Mode's sound is reminiscent of a vintage arcade machine. Whose idea was it to have a retro soundtrack implemented within the game?

The Retro Mode of the game originated in a series of tests by the main programmer. He was experimenting with a program for rendering effects—called "shader"—a visual content processing method for low-resolution conversions.

As the game was nearing completion, I decided to modify the music to fit these manipulated visuals. Everyone on the staff was intrigued by the combination of retro graphics processing and simplified sounds. Since we had come this far, it was decided, why not make it an independent play mode? That led to implementing the Retro Mode as a stand-alone element for the game. I believe that the feature can be enjoyed by a wide range of players, as it offers a feeling of nostalgia for veterans of classic games and also a fresh experience for younger players.

Could you share with us some of the technical details involved in producing these audio effects?

How Retro Mode works is fairly simple. In Omega Five, the sound is played through a built-in synth-like method, so the sound generator itself is treated as an individual module. Switching over between Normal Mode and Retro Mode substitutes the sound generator. Your impression of the sound is different because the characteristics have been changed, but the same musical notes are being played.

The Retro Mode sound source is a group of simple waveforms made using Adobe Audition. As I mentioned, the music data for Normal Mode and Retro Mode is identical, except for the sound generator. Nevertheless, I was struck by the dramatic difference between the two. The simple waveform sounds are clearly audible and direct, compared to the complicated sound sources. The development staff told me that they liked the Retro Mode sound even better than that of the Normal Mode. I have mixed feelings about that opinion, but it's worth mentioning

How did the collaboration with SuperSweep on the arrangements for Omega Five come about?

It started off with an message I got from [Manabu] Namiki (aka Santaruru). After the game had been distributed digitally, he sent me his impressions of the game along with expressing his wishes for a soundtrack release. It sounded like a great opportunity, since Omega Five had been my first original title in some time. That was how it came to be that I was introduced to SuperSweep by Namiki-san and they agreed to produce the album. The finished soundtrack turned out wonderfully.

Previously my soundtrack for an NES game called Chaos World was arranged for an album release, so I was really looking forward to hearing the results this time. Still, I never could have predicted how stirring the arrangements would be. They were my songs all right, but having taken on the distinct tastes of others, and from the first moment of listening to them it was like a miraculous new discovery.

What are your thoughts on the Xbox Live Arcade as a platform for new game titles? How does it compare to other game systems and delivery methods that you have created games for previously?

I think there are a lot of advantages to the Xbox Live Arcade platform. Having an integrated player ranking list and cooperative network play are great features. It’s also unique for having a playable demo available for every game. As far as videogame music is concerned, when the service first started, we either had to limit the number of the tracks or use built-in synth in order to accommodate the capacity restrictions. I think that most of these technical problems can be solved now because of recent improvements in the technology. I think that it would be truly interesting if games come about using the powerful sound capabilities of the Xbox 360 while incorporating a system that manipulates sound in real-time so that the music interacts on a deep level with the gameplay.

For the soundtrack album, you also arranged your own theme "Road to the Future." How did you intend for the approach to differ from the original and retro arrangements?

The arranged theme of "Road to the future" consists of three songs, mainly the staff credit track. However, instead of merely putting the three songs together to produce a medley, I aimed to create a single track. I did not revise much, and in looking back perhaps it would have benefited from a little more variation. What I wanted to do was connect the final track with the intro so that the entire score as a whole loops. I knew this arrangement would be the last song on the soundtrack, so tying in the intro track was a way of bringing the whole album together. It would make me glad to know if just a few listeners caught on to this idea.

A official twitter acount @TENGO_PROJECT as developers of OMEGA FIVE and WILD GUNS Reloaded has been opened. Please follow if you instrested them. Thank you.