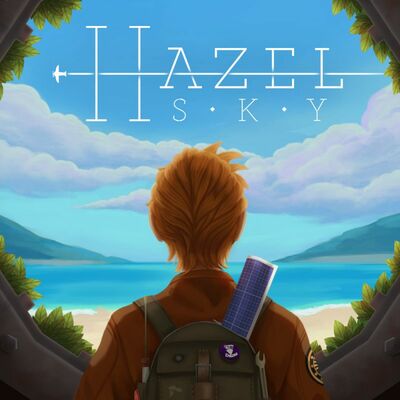 Protagonist Shane jumps, climbs, swings, and slides through the flying city of Gideon. The player is challenged with repairing ramshackle flying machines in an effort to pass the trials required to earn the honored role of Engineer, allowing Shane to return from the mysterious city to his home.

Neon Doctrine has published the digital soundtrack by Brazilian musician Leonardo Cardoso Maciel through Steam. The album contains two parts: all the songs that Shane can play on his acoustic guitar, and Hazel Sky's ambient background music.

Sent to an island far from home in the flying city of Gideon, Shane must pass the trials and return as an Engineer or face banishment. Connected via radio, Shane and fellow trainee engineer, Erin strike up an illicit friendship. A friendship that will change the way Shane sees the world.

The Trials are the ultimate test that every Engineer must take before taking the honored role. For Shane, the trials are his destiny, but destiny and desire rarely align and, in a world, divided between honored engineers and reviled artists, Shane finds himself torn. The trials, events in Gideon, and an unlikely romance tell the bittersweet story of love, ambition, and a society on the brink of something new.

⚙️🛩️Hazel Sky, a bittersweet story of love, ambition, & fate is out now!

"A deeply personal game that touches on our experience of being pulled in many directions by school, friends, family, & our own desire to create."