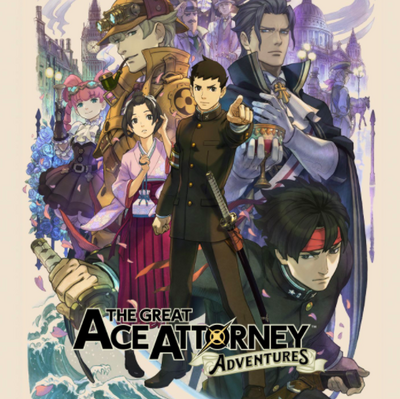 The Great Ace Attorney Chronicles launched in English-language regions on July 27th for Nintendo Switch, PlayStation 4, and Windows through Steam.

First published for 3DS in August of 2017 and later ported to smartphones, The Great Ace Attorney duology was directed by Ghost Trick game designer Shu Takumi. The historical drama, subtitled "The Adventure of Ryunosuke Naruhodo," introduces an ancestor of Phoenix Wright as he studies to become a defense attorney in Meiji Period Japan, near the end of the 19th century.

In The Great Ace Attorney Adventures, the protagonist surreptitiously finds his way to England to further his studies, while training under a world-renowned detective. The sequel, subtitled "The Resolve of Ryunosuke Naruhodo" in Japan, follows Phoenix Wright’s descendent as he investigates criminal accusations leveled against Meiji era novelist and British literary scholar Natsume Soseki.

The music score from The Great Ace Attorney is available for purchase in two parts through Steam, featuring music by Yasumasa Kitagawa, Yoshiya Terayama and Hiromitsu Maeba. The digital album is streaming on Amazon Music Unlimited and Spotify.

YES! It's been one year since #TheGreatAceAttorney Chronicles launched, setting Ryunosuke Naruhodo on a thrilling adventure of mystery and intrigue that put his resolve to the test. Thank you to all of our fans for your continued support! pic.twitter.com/GxcSr78XIV