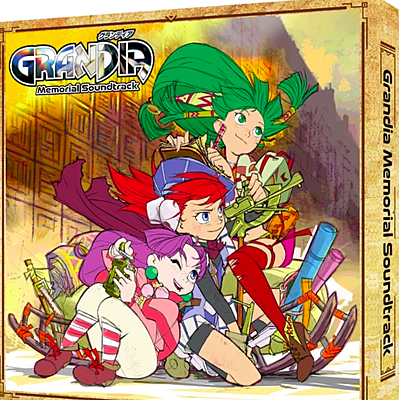 The Grandia Memorial Soundtrack vinyl soundtrack ships on mint green discs. The box set is available through distributors Light in the Attic in Seattle, Fangamer in Tucson, and PixelCrib in Australia. The five-disc CD release ships from publisher Wayô Records.

Cover art is by Grandia co-director and animator Toshiaki Hontani. A 45-minute excerpt can be previewed on YouTube, courtesy of the publisher. From the product page:

In partnership with Game Arts, Wayô Records is proud to add a Japanese RPG masterpiece to its catalog with the Grandia original soundtrack composed and arranged by Noriyuki Iwadare! Acclaimed title on the SEGA’s Saturn released in Japan in 1997, Grandia reaches the West for a release on the Sony’s PlayStation in 1999, and has a HD remaster in 2019 on Nintendo Switch and PC.