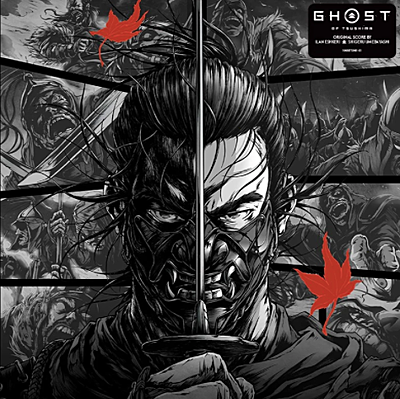 Milan Records has pressed the three-disc Ghost of Tsushima vinyl soundtrack, available for shipping through the publisher in Los Angeles, along with distributors Light in the Attic in Seattle and PixelCrib in Australia.

Developed by Sucker Punch, the PlayStation 4-exclusive action-adventure game places the player in the role of a samurai tasked with protecting Tsushima Island during the Mongol invasion of the late 13th century. The 22-track music score is composed by Ilan Eshkeri and Shigeru “Ume” Umebayashi, available for streaming on YouTube Music, Spotify, and Apple Music.

As described in a PlayStation Blog post on the music score, the soundtrack is inspired by folk songs, court music and taiko drumming, and informed by the pentatonic scales used in traditional Japanese music. Instruments employed include the shakuhachi, koto, shamisen, taiko and biwa. Strings and brass were recorded in London at Abbey Road and Air Studios.

With Tsushima on the brink of destruction, Jin Sakai must sacrifice everything to defeat the ruthless Mongol invaders and protect what’s left of his home and people. As he embarks on an epic adventure for the freedom of Tsushima, he is forced to set aside samurai traditions and become a new kind of warrior.

The soundtrack features music written by Ilan Eshkeri that serves as the sonic companion to the game’s narrative, as well as music written by Shigeru Umebayashi for the exploratory, open world dimension of the game.

This weekend marks two years since the release of #GhostOfTsushima! We are blown away by all of the support since then and so grateful for all of you! Thank you to everyone who has played and shared this journey with us!

Here are just some of the amazing stats since launch: pic.twitter.com/DMgzYGTih1