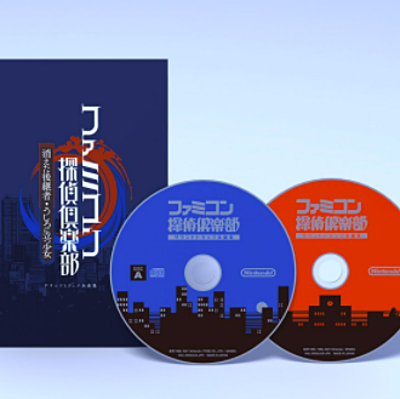 The Japan-exclusive Collector's Edition of Famicom Detective Club is due out for Nintendo Switch on May 14. The box set ships with a 75-track album on two compact discs, including music from the 8-bit Famicom source material.

The Japanese-language Collector's Edition is currently available for preorder through Play-Asia. Famicom Detective Club volumes 1 & 2 are also slated for release in English-language regions on May 14.

Famicom Detective Club: The Missing Heir: Solve a murder mystery surrounding a wealthy Japanese family. Hunt for clues, talk to suspects, and explore the Japanese countryside after tragedy strikes the wealthy Ayashiro family. Filled with suspense, this tale follows an amnesia-stricken detective trying to unravel his own past amidst the horrors of a harrowing murder investigation.

Famicom Detective Club: The Girl Who Stands Behind: Find the secret behind a grizzly rumor haunting a Japanese high school. Interrogate suspects and hunt for clues to piece together chilling conundrums plaguing a high school in Japan. Suspense (and a little bit of horror) ensues as you try to free students from their nightmare.

Two deep cuts from Nintendo history are making their debut in North America! In #FamicomDetectiveClub: The Missing Heir and Famicom Detective Club: The Girl Who Stands Behind, dive into two deep narrative mysteries, localized and modernized for #NintendoSwitch, launching 5/14. pic.twitter.com/vSObFQ2uAU