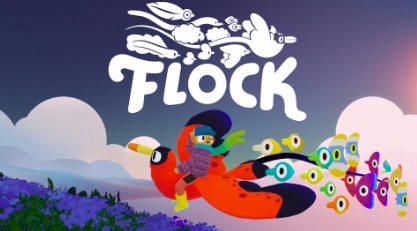 During the Annapurna Interactive Showcase broadcast in late July, the game publisher announced Flock for Windows, alongside Xbox and PlayStation consoles.

Developed by Hollow Ponds and Richard Hogg, the multiplayer co-op game places players in control of flying shepherds, each tending to a flock of airborne creatures. Guide the flock to untouched pastures and shear their fur to fashion hats, cardigans, and socks.

Musician Eli Rainsberry is composing music for the soundtrack. Flock is coming soon to Steam, PS4 and PlayStation 5, and Xbox One and Series X|S.

Flock is a multiplayer co-op game where players take on the role of flying shepherds, each tending to their own unique herd of adorable flying creatures.

The game is an ode to the joy of flight and discovery. Starting with a small herd of hover-sheep, you nurture and fly them toward fresh, untouched pastures. Along the way, you will discover the secrets of the beautiful uplands and its wild creatures.

Weird flying creatures. Are they fish? Birds? Snakes? It’s a real mystery. They are mostly friendly though, and with a bit of skill you can charm them to join your flock.

hey hello this is the aforementioned next game from @hllwpnds that I’m composing for. this is probably one of the most playful bits of music i’ve ever created for a thing!!

it’s been sweet to see and hear what folks have been making of Flock so far, too, thank you for that 🐧 https://t.co/UzrtCWAgp8