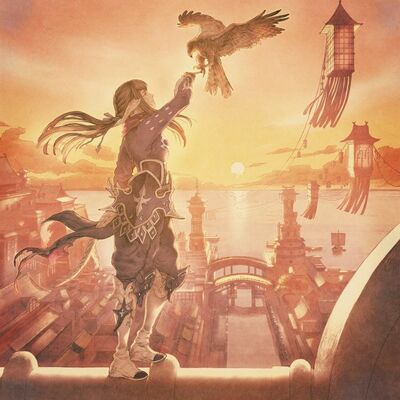 Square Enix has opened preorders for the Final Fantasy XIV: Stormblood vinyl LP. The analog record release, decorated with cover art by KUROIMORI, is estimated to ship on August 31.

The full Stormblood soundtrack also ships domestically on music Blu-ray, featuring approximately one hundred music tracks appearing in MMO Patch 4.0 through 4.3. The digital soundtrack is available for streaming on Spotify and Apple Music. Music for the massively multiplayer online role-playing game expansion is composed by Masayoshi Soken, Nobuo Uematsu, and other artists.

Final Fantasy XIV is currently available for PS4, Windows and Mac operating systems. The PlayStation 5 port is scheduled to launch on May 25 with DualSense haptic feedback and 3D audio support.

Experience the adventures once more in this Blu-ray Music Disc album that collects approximately 100 songs from Patch 4.0 through 4.3. Enjoy the sounds of field music from the Gyr Abania, the Ruby Sea, and Yanxia, or relive fierce battles against Lakshmi and Susano while listening to their themes. Or let the tracks featured in the Dimensional Rift Omega and Return to Ivalice raid content stir the memories of those challenges.