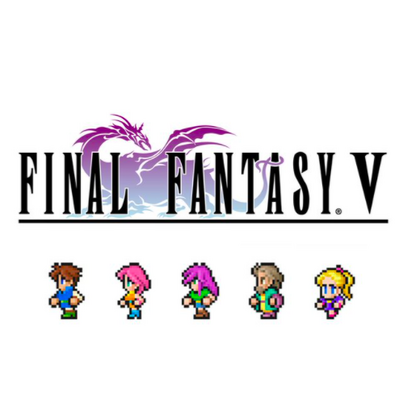 Additional features include a widescreen display, character sprite art overseen by Kazuko Shibuya, a fast-forward option, mini-maps of dungeons and towns, a music player and bestiary. Music for the latest iteration of Final Fantasy V is composed by Nobuo Uematsu and arranged by multiple artists, overseen by music director Hidenori Miyanaga

"Battle at the Big Bridge" from Final Fantasy V, arranged and performed by Yui Morishita, can be viewed on YouTube, via the Square Enix Music channel. The Super Famicom soundtrack's "Revival Disc" Music Blu-ray ships domestically through distributor Play-Asia.

The original FINAL FANTASY V comes to life with completely new graphics and audio as a 2D pixel remaster! A remodeled 2D take on the fifth game in the world-renowned FINAL FANTASY series! Enjoy the timeless story told through charming retro graphics. All the magic of the original, with improved ease of play.

The King of Tycoon has sensed a disturbance in the wind. When the crystals that balance the powers of the world are threatened, the king hastens to the rescue...only to go missing. Somewhere a young man and his Chocobo find themselves drawn toward friends that will change their destiny. Building on the job systems of previous games, FFV includes a diverse selection of jobs to try, and a unique ability system that lets you combine skills.