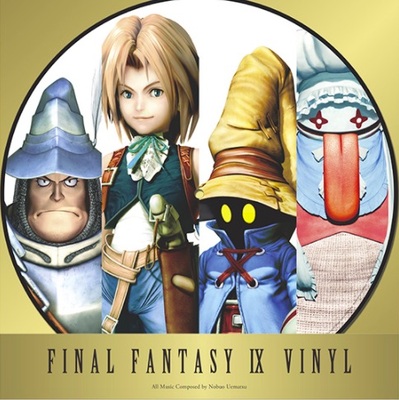 Square Enix has posted a trailer for the Final Fantasy IX vinyl set. Commemorating the 22nd anniversary of the PlayStation role-playing game, the picture disc analog record release is available for preorder through the Square Enix store for North America and Europe.

The enhanced port of Final Fantasy IX is available for Windows, PlayStation 4, Nintendo Switch, Xbox One, iOS and Andoid devices. The 110-track Final Fantasy IX Revival Disc Blu-ray ships from the Square Enix store for North America, containing the original score and 42 additional tracks. Excerpts from the soundtrack are on YouTube, courtesy of the publisher.

Zidane and the Tantalus Theater Troupe have kidnapped Princess Garnet, the heir of Alexandria. To their surprise, however, the princess herself yearned to escape the castle. Through a series of unusual circumstances, she and her personal guard, Steiner, fall in with Zidane and set out on an incredible journey. Meeting unforgettable characters like Vivi and Quina along the way, they learn about themselves, the secrets of the Crystal, and a malevolent force that threatens to destroy their world.

Which tracks are you looking forward to hearing first? pic.twitter.com/kxj3Oz8YXs