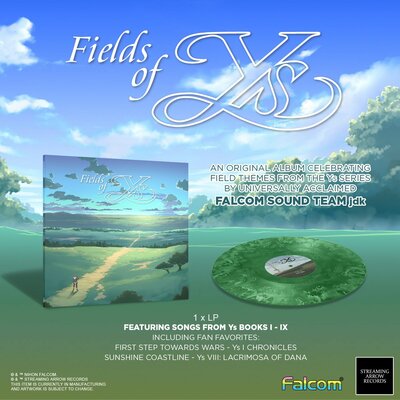 Based in in Carlsbad, California, record label Streaming Arrow has published Nihon Falcom's "Field of Ys" compilation album. Preorders for the 180-gram analog record release are open at distributor PixelCrib in Australia.

The nine-track "Ys" compilation selects one iconic music track from each mainline franchise title. They include "First Step Towards Wars" from Ys I, composed by Yuzo Koshiro, as well as "The Boy Who had Wings" from Oath in Felghana, composed by Mieko Ishikawa.

From Oath in Felghana's graceful rendition of "The Boy's Got Wings" and of course Ys VIII: Lacrimosa of Dana's masterfully crafted "Sunshine Coastline" beautifully combining heavy metal guitar riffs, fast drum work, Violins and keyboard synthesizers to deliver an energetic and uplifting track mixed with twinges of majesty and nostalgia.

Streaming Arrow Records - (OUT OF STOCK)

Limited edition copies of Fields of Ys are finally in hand, shipping for all remaining orders begins now.

We have a mountain of orders to go through, but we'll be working as fast as we can to get everything out the door as soon as possible. pic.twitter.com/7LIc3BTYtp