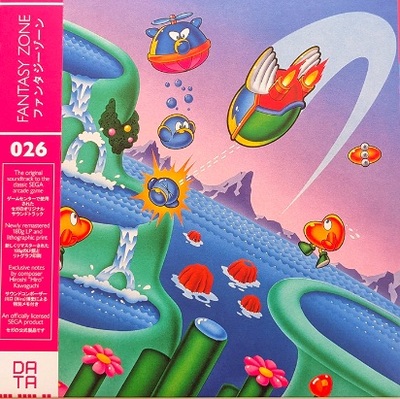 London-based record label Data Discs has opened orders for the remastered Fantasy Zone vinyl soundtrack album. Previews of "Keep on the Beat" and "Saari" are streaming on the publisher's SoundCloud channel.

The 180-gram analog record release features remastered audio, sourced from the original arcade cabinet, and will include new liner notes by Hiro. Preorders have opened at distributors Black Screen Records in Europe and PixelCrib in Australia. Sega's previously published digital soundtrack is streaming on Spotify and Amazon Music Unlimited in three separate volumes.

An interplanetary monetary system collapses as its funds are mysteriously funneled towards the construction of a fortress in the Fantasy Zone. It's up to Opa-Opa to rescue the Fantasy Zone and find the culprit responsible!

Eliminate all the bases to reach the end boss and advance to the next level. Use lasers and bombs to destroy all enemies and take advantage of weapon and engine upgrades! Want a change in palette? Play as Opa-Opa’s brother, Upa-Upa!