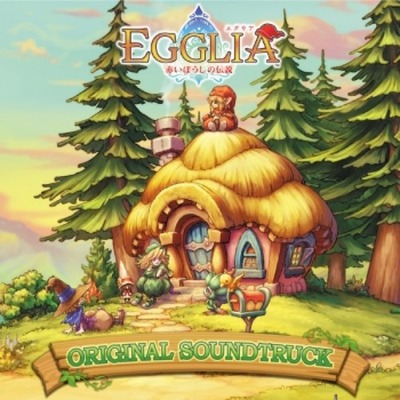 An enhanced port of the fantasy title, called Egglia Rebirth, is due out for Nintendo Switch on February 10th. Publisher Brownies is led by CEO Shinichi Kameoka, whose illustrations helped shape the visual aesthetic of Sword of Mana and Legend of Mana. The console port adds over fifty new events, enhances characters' facial expressions during cutscenes, and gives the player freedom to control the main character's movements.

The Egglia: Legend of the Redcap soundtrack album ships domestically from CDJapan on a single compact disc, published by Harmonics International.

Once upon a time, there was a magical kingdom known as Egglia. Within its borders, all manners of species lived peacefully and in harmony with one another.

But these days were not to last.The kingdom was sieged by gigantic, brutish Ogres, who laid waste to all they touched.Faced with imminent destruction, Egglia's ruler and its most powerful wizard, Kuff, sealed his precious kingdom away inside a magical egg. There Egglia remained, kept safe from strife and harm, waiting for the right time to be set free once more.

It's here that the story begins: with a fateful encounter between a girl born to save the world, and a red-capped boy born to destroy it. With the crossing of their paths, a new legend is born.