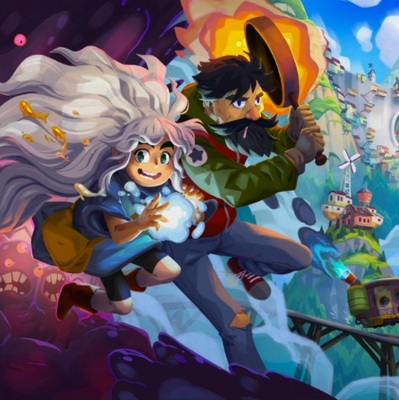 Preorders have opened for the Eastward double vinyl soundtrack album by iam8bit. Vinyl album design is by Ryan Brinkerhoff, while cover art is illustrated by Laura Bifano.

Traversing a fictional near-future cross-country railway, protagonists John and Sam take on monsters and join new party members, while exploring cities and towns plagued by a deadly miasma and teetering on collapse. Eastward is currently available for Nintendo Switch, and for Mac and Windows through Steam and GOG.

Music for the game is by Joel Corelitz, with sound design by Hyperduck Soundworks. Shipping for the vinyl soundtrack is estimated for Quarter 3, 2022 through the publisher, while preorders are also open at distributors Light in the Attic in Seattle, PixelCrib in Australia, and Black Screen Records in Europe.

Eastward is a game defined by its contrasts, a tale of finding hope even while on the brink of total dismay, told via a retro aesthetic and some decidedly modern and unexpected storytelling. It’s no surprise, then, that composer Joel Corelitz crafted an appropriately eclectic soundtrack for Pixpil and Chucklefish’s Adventure RPG. It’s a love letter to the history of video game music, dancing confidently between genres, moods, and themes while weaving together a fully realized portrait of the game’s unique world.

Now, iam8bit is proud to present that soundtrack on vinyl, featuring cover art from Laura Bifano and album design from Ryan Brinkerhoff. This standard edition is presented on 2xLP black vinyl, featuring over 2 hours of musical goodness.

Eastward is a special game, and we wanted to do something special to celebrate it.