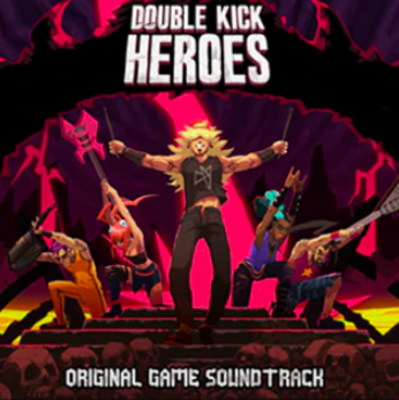 G4F's 140-gram, three-disc publication, pressed to red splatter vinyl, contains 40 music tracks, with a trifold cover design by Headbang's graphic designer Guillaume Breton. Double Kick Heroes is available for purchase for Xbox One, Nintendo Switch and Windows via Steam. The digital soundtrack in two volumes is available for purchase through Steam and Elmobo's Bandcamp page, and is streaming online on Spotify.

Triple vinyl (140g) edition of the soundtrack to Double Kick Heroes (Headbang Club), the only rhythm game where you kill hordes of zombies to the sound of METAL music! The edition includes 40 tracks composed by elmobo.

It's time to HEADBANG!🤘😈#DoubleKickHeroes vinyls are ready to be shipped!
It starts right now for all pre-orders😎
Shout-out to @elmobo!