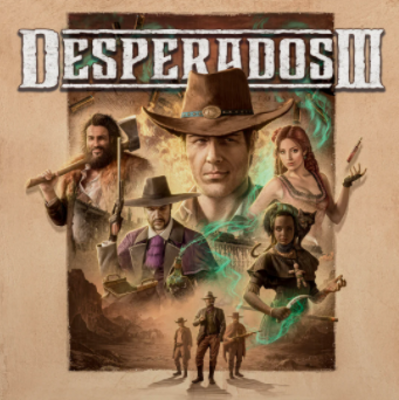 Developed by Mimimi Games, the prequel to Desperados: Wanted Dead or Alive is set in a ruthless Wild West scenario. The story-driven, tactical stealth game was published last year by THQ Nordic for PlayStation 4 and Xbox One consoles, along with Windows, Mac and Linux operating systems through Steam.

The album sports original artwork by art director Randis Albion and additional graphic design by Dane Baudoin. Shipping from the publisher is estimated for February of 2022. The full digital soundtrack in three volumes, composed and produced by Filippo Beck Peccoz, is available for streaming on Spotify.

Desperados III is a story-driven, hardcore tactical stealth game, set in a ruthless Wild West scenario. In this long-awaited prequel to the beloved classic Desperados: Wanted Dead or Alive, John Cooper will join forces with the runaway bride Kate, the shady hitman Doc McCoy, the giant trapper Hector, and Isabelle, a mysterious lady from New Orleans. On Cooper’s quest for redemption, his adventures lead him and his gang from rural towns, over swamps and riverbanks, and finally to a dramatic showdown worthy of Wild West legends.