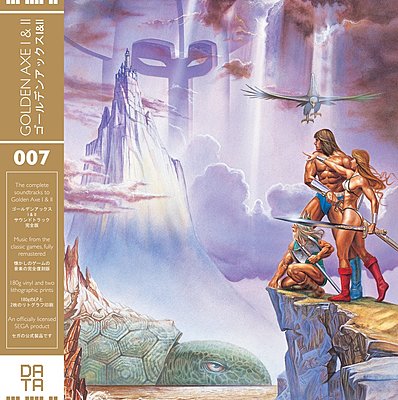 London-based label Data Discs' seventh collaboration with Sega is the Golden Axe I & II remastered vinyl soundtrack album. The record's packaging is decorated with sourced artwork from the Sega archives.

The Golden Axe I & II vinyl LP is available for purchase through the publisher in the UK, along with distributor PixelCrib in Australia. The remastered character select theme from Golden Axe II is streaming on SoundCloud, courtesy of Data Discs.

Music from the 1989 and 1991 Mega Drive beat-em-ups is by Tohru Nakabayashi and Naofumi Hataya. The original Golden Axe is a featured title on the Sega Genesis Mini console, and on the Nintendo Switch Online's Expansion Pack. The Golden Axe trilogy installments are available separately for Windows, Mac and Linux through Steam.

Golden Axe (1989) and Golden Axe II (1991), in one special package. This release features the unforgettable artwork from both games, supplied on two thick lithographic prints, with the record itself pressed on heavyweight translucent gold or classic black vinyl. An additional limited edition, featuring a purple swatch effect, is also available for early buyers. The outer sleeve features rare artwork from the 1989 Japanese edition, sourced from the SEGA archives and presented on 425gsm cardstock.

Four SEGA Genesis games have been made available for #NintendoSwitchOnline + Expansion Pack members!