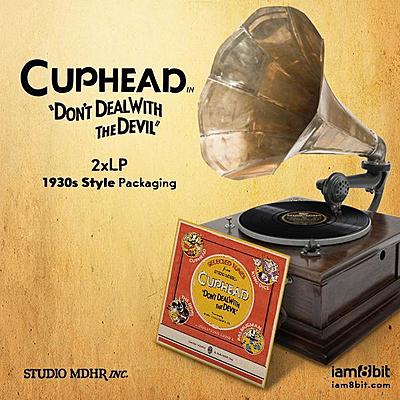 The analog record set, scheduled for shipping in Q1 2022, includes a handpicked selection of jazz and big band recordings composed by Kristofer Maddigan, percussionist and drummer based in Toronto, Canada.

Two behind-the-scenes recordings are viewable on YouTube, courtesy of the developer. The 50-track digital soundtrack is available for purchase through Bandcamp, and streaming on Apple Music and Spotify.

While Toronto-based percussionist and composer Kristofer Maddigan didn’t write the soundtrack for the video game Cuphead to be listened to as an album straight through, the music stands on its own, thanks to the sterling live band performances in a host of early-20th-century styles. Matching the game's vintage look with original music of a similar mood, Maddigan delves into solo piano and orchestral ragtime, marches, heart-pumping big-band blowouts (like “Botanic Panic,” “Threatenin’ Zeppelin,” and “Aviary Action”), and even barbershop quartet and tap dance.