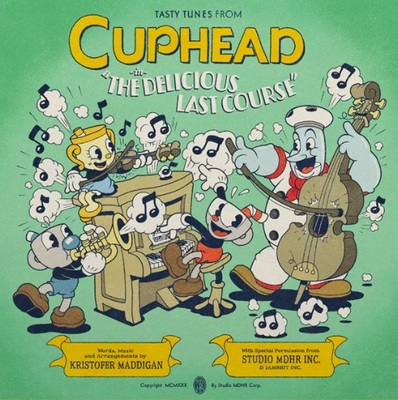 Publisher iam8bit pressed the Cuphead soundtrack on vinyl back in 2017. Preorders have opened for the two-disc Standard Edition vinyl reprint, scheduled for shipping in the first quarter of 2023.

The analog record set features a handpicked selection of jazz and big band recordings composed by Kristofer Maddigan, percussionist and drummer based in Toronto, Canada. Behind-the-scenes videos of "High-Noon Hoopla" and "Chef Saltbaker" recording sessions for the DLC content can be viewed on YouTube.

iam8bit will publish the two-disc vinyl soundtrack for developer Studio MDHR's Cuphead downloadable content "The Delicious Last Course," shipping on audiophile 180-gram black vinyl and including a foldout poster with art by Shawn Dickinson. The digital soundtrack is available for purchase through Bandcamp, and streaming on Spotify and YouTube Music.

Cuphead and the "The Delicious Last Course" are available for Nintendo Switch, Xbox One, PlayStation 4, and Steam. Vinyl preorders are also open at distributors Light in the Attic in Seattle, Black Screen Records in Europe, and PixelCrib in Australia.

In this The Delicious Last Course collection of ditties, we witness the evolution of maestro Kristofer Maddigan’s old-timey tunes into unexpected yet perfectly poignant places. It’s everything you love about Cuphead, but with a little extra seasoning, evident from the first zippy gasp of the game’s opening theme, featuring a cavalcade of harmonized vocals straight outta the coolest downtown nightclub in the 1930s, arranged atop a nuanced and emotionally rambunctious undercurrent. After all, this is the conclusion to an epic journey, and the way our pals Cuphead, Mugman and Ms Chalice express themselves best is through movement and sound — so what you hear is what they feel.

An official 2xLP vinyl of music from The Delicious Last Course is NOW available for pre-order.