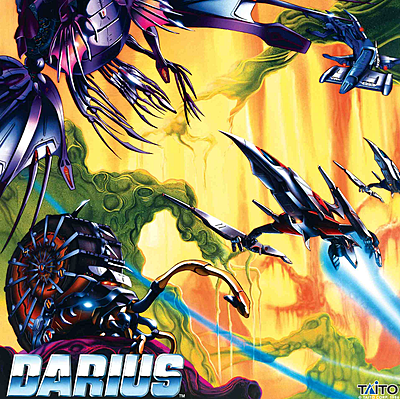 The previously published digital soundtrack album by Hisayoshi Ogura of Zuntata is available for streaming through Spotify and Amazon Music Unlimited. Excerpts from the soundtrack can be previewed on the Darius 30th Anniversary compilation trailer.

Darius is also included in the arcade and console editions of Darius Cozmic Collection for PlayStation 4, Nintendo Switch, and Windows via Steam.

"DARIUS" is TAITO's side-scrolling shooting game that first appeared as an arcade game in 1986. The goal for the player is to ride in the Silver Hawk fighter and escape from the Darius planet which is facing destruction from the alien attack. This title has received multiple prizes with its overwhelming gaming features including music, high quality animations and great arcade machine features using 3 screens! Besides the original version, this title also includes the EXTRA VERSION with various feature adjustments.

Arcade Archives DARIUS is now available on Nintendo Switch! It's TAITO's side-scrolling shooting game that first appeared as an arcade game in 1986.