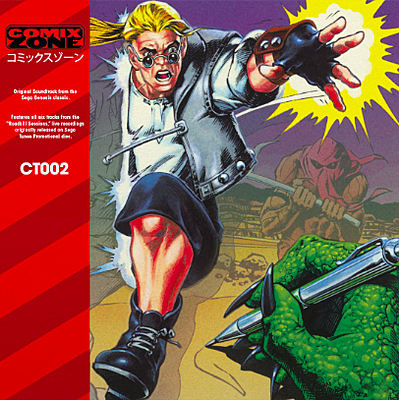 Produced by Sega Technical Institute (STI) director Roger Hector, the American gaming division oversaw the publication of the "Sega Tunes: Comix Zone" compact disc in August of 1996. The vinyl release includes over 20 tracks from the comic book-themed Sega sidescrolling brawler. A teaser trailer is on YouTube, courtesy of the publisher.

The analog record set ships from the publisher based in Chicago, as well as through distributors Vinyl Luxe, disk union in Japan, and PixelCrib in Australia. Excerpts are streaming on the Cartridge Thunder SoundCloud channel.

Get into the zone with the Comix Zone original soundtrack. Released in 1995, Sega's Comix Zone is one of the last great Genesis titles. Composed by Howard Drossin, the soundtrack is up to its inkwell in crunchy, gritty, evocatively 90s Genesis power. The soundtrack is complete with the addition of 1995's Sega Tunes release, featuring studio recordings from Roadkill.