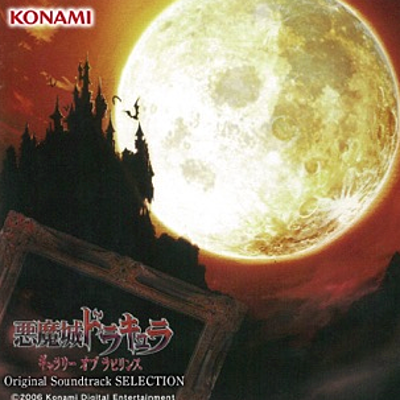 Produced by Koji Igarashi, Portrait of Ruin flashes forward to mid-twentieth century Europe, in the midst of World War II. Jonathan Morris inherits the fabled "Vampire Killer" whip from his late father and departs for Dracula's castle, aided by Charlotte Aulin of the magic-wielding Belnades clan. There they encounter a collection of paintings by the castle's new owner. Lord Brauner is rumored to be an artist capable of depicting "quantum-space barriers" on canvas capable of transporting the viewer to remote locations.

Konami's two-disc soundtrack release features 37 music tracks, both in their original presentation and adapted for the Nintendo DS console. Castlevania Bloodlines composer Michiru Yamane returns to compose and arrange the majority of the score, while several tracks are by Actraiser composer Yuzo Koshiro, and others are adapted from earlier compositions by Konami Kukeiha Club staff members. The 72-track digital soundtrack is available for streaming on Amazon Music, Spotify and Apple Music.

The soundtrack for Portrait of Ruin is included in Konami's "Music From Castlevania - Aka (Red)" compact disc set.

Play-Asia - Music From Castlevania - Aka (Red)