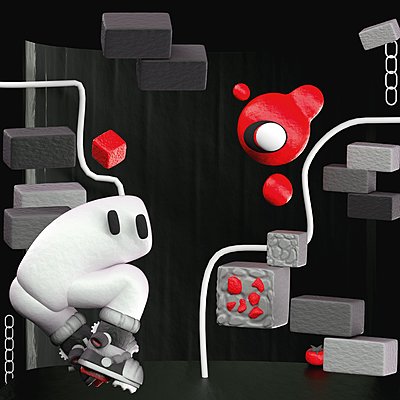 "Parts of the soundtrack were written on- and recorded off a Game Boy, other parts were written with the sample-based Impulse tracker," the composer commented in liner notes. "For the Downwell soundtrack I set out to create somewhat sparse, exotic, dark little chiptune-centric jazz pieces. Inspired by the likes of Erik Satie, Ryoji Yoshitomi, Minako Hamano, Alex Mauer, Ilkae and Jun Ishikawa."

Downwell is a curious game about a young person venturing down a well in search of untold treasures with only his Gunboots for protection. Make your way further and further down into the darkness filled with nasty creatures and mysterious secrets to collect the spectacular red gems scattered about the rocks. Step into precariously placed shops and buy some helpful items or level up between levels to battle well-dwelling monsters and uncover hidden caves filled with riches and relics. No two trips down the well are ever the same...