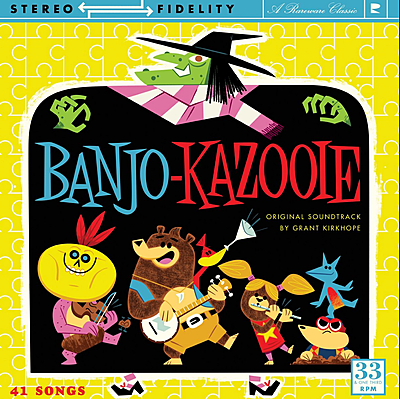 The four-disc reprint of the Banjo-Kazooie vinyl soundtrack box set is currently available for shipping through publisher Fangamer and for preorder through distributor Black Screen Records in Europe.

Rare's 1998 single-player 3D platformer for the Nintendo 64 console stars bear Banjo and supporting character Kazooie, a bird whose wings emerge from the player character's backpack to help him ascend to out-of-reach platforms. The duo are tasked with gathering musical notes and jigsaw pieces to progress through nine explorable areas.

Fangamer's 41-track compilation is curated by Rare and composer Grant Kirkhope, featuring original art by Andrew Kolb. Banjo-Kazooie is included in the Rare Replay game compilation for Xbox One and featured in the Nintendo 64 library of the Nintendo Switch Online subscription service. The "Spiral Mountain" theme is featured on the Rare All-Stars 35th Anniversary Collection album.

Fangamer and Rare have worked together to bring you the Banjo-Kazooie soundtrack in a stunning vinyl package... Four separate vinyl collected in one sturdy slipcase. Double-sided insert with liner notes from Grant Kirkhope...

Our Banjo-Tooie vinyl box set is here! 46 songs on 4 LPs, curated by @RareLtd and @grantkirkhope, with beautiful art by @kolbisneat.

The Banjo-Kazooie box set is back in stock, too! They're both available now: https://t.co/iYzLHyGT9Q pic.twitter.com/mSrFi23Ncq