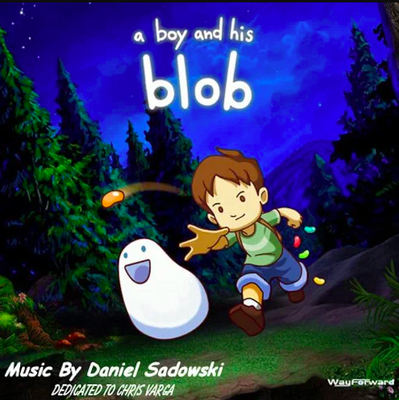 Developer WayForward has announced a Nintendo Switch port for their puzzle-platformer A Boy and His Blob, to be published on November 4th by Ziggurat Interactive. The Switch edition will include forty additional challenge levels.

A reboot of the franchise dating back to Absolute Entertainment's 1989 NES title Trouble on Blobolonia, A Boy and His Blob launched for the Nintendo Wii console in October of 2009. The 2D sidescrolling adventure title requires the player to cooperate with his amorphous pet in traversing various obstacles. Feeding the blob jellybeans prompts the critter to transform into a number of shapes, including the Caramel Cannon, Bubble Gum Bouncer, and Tangerine Trampoline.

A high-definition port developed by Abstraction Games is available for PlayStation 4 and Xbox One , as well as Windows, Mac, and Linux operating systems through Steam. The 30-track digital soundtrack, composed by Daniel Sadowski, is streaming on Amazon Music Unlimited, Spotify, Apple Music.

A Boy and His Blob makes its triumphant return! A reimagining of the NES classic, as the boy, you feed your blob jelly beans and watch him transform into cool and useful objects to solve puzzles and escape danger. With its robust and emotionally driven story, challenging puzzles, and visually impressive art style, A Boy and His Blob is sure to become a classic once again.

When Blobolonia is threatened by an evil Emperor, the blob comes to Earth looking for help. Instead, he finds a young boy. Help the blob dethrone the evil Emperor that's terrorizing Blobolonia and establish a friendship with the blob that will last a lifetime.

Get your jelly beans ready and warm-up that hug button, A Boy and His Blob is coming to Nintendo Switch on November 4th!