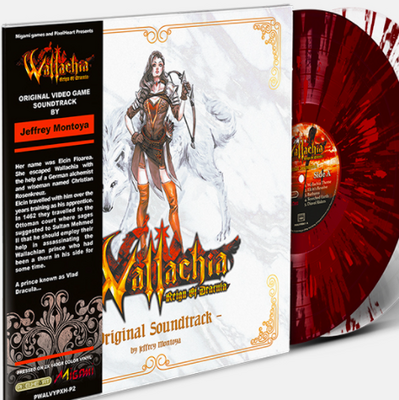 Migami Games’ 2D action platformer Wallachia: Reign of Dracula launched for Windows in 2021, published by Pixelheart. Physical releases of the Nintendo Switch and PlayStation 4 ports ship from the publisher's website.

In Wallachia, the player assumes the role of bow-wielding vampire hunter Elcin Floarea. Over the course of seven stages of classically challenging arcade gameplay, Wallachia follows the protagonist's personal mission to bring down the titular dark lord Vlad the Impaler.

The audio design for Wallachia: Reign of Dracula makes use of professional voice acting by Kira Buckland and Robert Belgrade. Music is by Migami Games composer Jeffrey Montoya. Filled with moody, atmospheric music, the 23-track soundtrack album is available for preorder through the Pixelheart site.

The Wallachia soundtrack album ships on vinyl or compact disc. In addition, the "OST Bundle" for PlayStation 4 includes the physical edition of the game, the compact disc set, and the vinyl soundtrack.

Prince Vlad Dracula is 6 bloody years into his second reign. After losing the throne once before in 1448, Dracula vowed not to let it happen again. After years of exile, he regained power in 1456 and started purging yhe land of anyone who might oppose him… But a young girl escaped him. Her name was Elcin Floarea!

I'm so grateful to have worked alongside amazing artists who made the game come out beautifully.

Check out my illustrations on CD layout and my cameo as lead guitarist in "Targoviste in Shadows".@Migami_Games #goodies #OST #PixelHeart #junkisakuraba #game #indiedev https://t.co/MYcJ9AJ4mD