Turok the Dinosaur Hunter score and remixes on Bandcamp 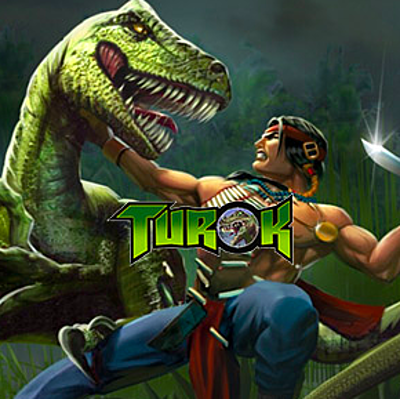 NightDive Studios will publish the enhanced port of Turok the Dinosaur Hunter for PlayStation 4 on February 25, featuring music by Darren Mitchell. Turok is currently available for Nintendo Switch and Xbox One, as well as Windows through Steam and GOG.com.

The 14-track digital soundtrack from the Nintendo 64 first-person shooter can be purchased on the composer's Bandcamp page. In addition, Mitchell's "From the Composer's Private Collection" is hosted on the same page, recorded in 1997 with the original equipment and published for the first time twenty years after its creation. Four remix tracks, found on the 1998 limited edition European CD pressing, are also available.

Excerpts from the N64 game score are both streaming on the composer's SoundCloud channel and on Spotify.

Turok is back and no dinosaur is safe! When it was first released in 1997, Turok introduced gamers to a world teeming with cunning enemies, traps, puzzles and deadly weapons all within a vast 3D environment ready to explore. Now the classic game has been restored and enhanced with a new visual engine and exciting new features to sink your teeth into...