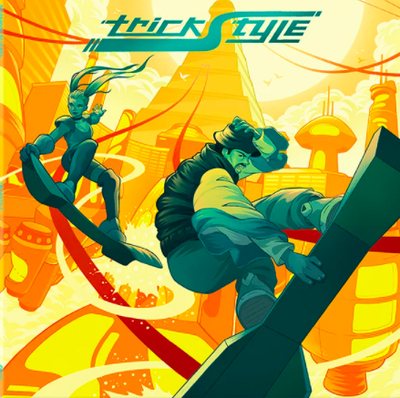 Developed by Criterion Games, TrickStyle was published by Acclaim Entertainment for the Sega Dreamcast console in 1999. Throwback Entertainment ported the stunt-filled hoverboard racer to Windows in 2015, currently available through GOG, and through Steam with the digital soundtrack album.

The analog record release by Respawned ships from the publisher in the United States, as well as from Europe through distributor Black Screen Records of Germany. Cover art for the vinyl publication is by Miguel Co.

Grab your hoverboard and take to the skies in the futuristic super-speed air racing of TrickStyle. There's no need for wheels here as you choose your stylish racer and board and head for the Velodrome. At the Velodrome staging area you enter a room and decide which of the 18 tracks you'd like to strut your airborne stuff on.

Race on three continents on awesome tracks that will challenge your every reflex and skill. But wait, there's no time to rest as you face off against a champion boss character. Emerge victorious and you'll unlock brand new hoverboards to compete with.

As part of RespawnFest we will be releasing the official soundtrack to TrickStyle!
Saturday October 9th at 1pm est.
Other great things happening from the 3rd through the 10th so stay tuned!
Photo credit @gaemingfreek instagram#vinyl #gaming #music pic.twitter.com/j3Il5Khx9b