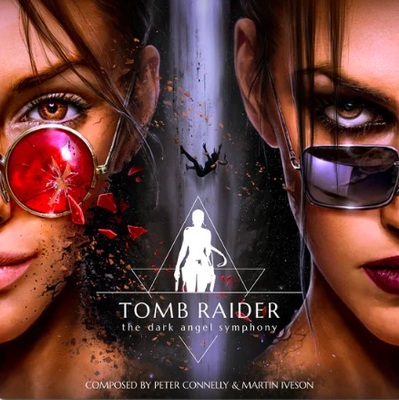 The two-disc analog record release for arrangement album "Tomb Raider: The Dark Angel Symphony" has been published by Backrest Records, available for shipping from distributor Black Screen Records in Europe.

The orchestral arrangement album, selecting music tracks from Tomb Raider 4: The Last Revelation, Tomb Raider 5: Chronicles and Tomb Raider 6: The Angel of Darkness, was successfully funded through a Kickstarter campaign. The digital release is streaming on Spotify and YouTube Music.

Music for the orchestral album is composed by Peter Connelly with Martin Iveson, arranged by Richard Niles, Peter Hammond, and Dean Kopri. Cellist Tina Gio is featured on opening track "The Last Revelation" and vocalist Julie Elven performs on closing track "She Will Live on Forever in our Hearts."

"2018 marked 15 years since Tomb Raider – The Angel of Darkness hit the shelves. 2019 was the 20th anniversary of my debut in the Tomb Raider franchise, composing the score for Tomb Raider: The Last Revelation.

To celebrate this, we launched a crowdfunding campaign to produce a studio album featuring the music from Tomb Raider 4, 5 and 6. This campaign has been organised entirely by a dedicated group of die-hard Tomb Raider fans and featured world-class names from within the music industry. The album is not a direct copy of the original Tomb Raider games’ scores, although it remains faithful to them. The music is transformed and rearranged using techniques and personnel that were simply not available or within reach 15–20 years ago.

The original versions of my tracks are also available, properly remastered and beautifully presented, to tie-in with the new orchestral album." - Peter Connelly

As the project is now finished, @tombofash decided to preserve a digital copy of Tomb Raider: The Dark Angel Symphony Sheet music for you.
Grab it here for free:https://t.co/4wlU353UgO
2 last physical books are also available:https://t.co/HAnzcWrfox pic.twitter.com/fb51lyelDE