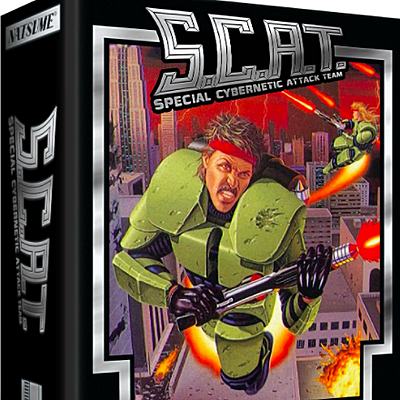 S.C.A.T. joined the Nintendo Switch Online app's library of 8-bit NES titles in September of 2020. Music for the 1990 science fiction action game by developer Natsume is composed by Kiyohiro Sada. From the product page:

Set in a futuristic New York City during 2029, you are a part of a cyber soldier team called “S.C.A.T.” You must fight off an alien invasion led by the evil Vile Malmort, who has constructed an “Astrotube” which acts as a path from their space station to the ruins of NYC. You can play as S.C.A.T. soldier Arnold, Sigourney, or grab a friend and play both in co-op mode. Collect power ups, and blast through side-scrolling levels in S.C.A.T.: Special Cybernetic Attack Team developed on the Nintendo Entertainment System by Natsume.

Standard and Collector's Editions for the NES are available now through February 7. Mark your calendar (or grab it now) so you don't miss the pre-order window! pic.twitter.com/gWvlcPU5fa