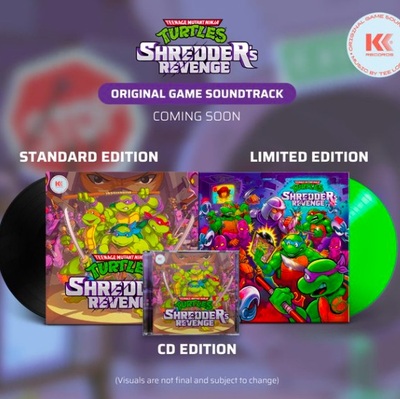 Shredder's Revenge is developed by Tribute Games, the Montreal studio behind sprite-based titles Panzer Paladin and Mercenary Kings. The sidescrolling brawler reunites Leonardo, Raphael, Michelangelo and Donatello in a showdown against Krang, Bebop and Rocksteady and the Foot Clan.

The latest installment in the TMNT game franchise pays homage to its routes by emulating the visuals of the 1987 animated series and Konami's classic brawlers. Available for Steam, Nintendo Switch, PlayStation 4, and Xbox One through publisher Dotemu, music for the multiplayer game is by Sonic Mania composer Tee Lopes.

Newly formed record label Kid Katana has opened preorders for the soundtrack on vinyl and compact disc, with shipping estimated for October 28th. The two-disc limited edition green vinyl release comes with a hard cover slipcase, decorated with art by ZombieYeti. The standard black edition of the double vinyl ships with a booklet with liner notes by participating artists.

Teenage Mutant Ninja Turtles: Shredder’s Revenge features groundbreaking gameplay rooted in timeless classic brawling mechanics, brought to you by the beat ’em up experts at Dotemu (Streets of Rage 4) and Tribute Games. Bash your way through gorgeous pixel art environments and slay tons of hellacious enemies with your favorite Turtle, each with his own skills and moves - making each run unique!

Choose a fighter, use radical combos to defeat your opponents and experience intense combats loaded with breathtaking action and outrageous ninja abilities. Stay sharp as you face off against Shredder and his faithful Foot Clan alone, or grab your best buds and play with up to four players simultaneously...